Thanks to the unreliability of movie marketing, our understanding of what ticks our proverbial boxes is often unreliable. How many times have you thought you’d love a film because it has X Y & Z, only to walk out feeling short-changed? Or dismissed a perfectly good comedy the first time around because the pink colour-blocking and female strong cast made you believe it was a cliched rom-com? (I’m almost exclusively thinking of Bridesmaids here).

This is where I come in. A long time believer that women are just people, I’ve compiled a list of female-led films anyone can and probably should watch, since well-rounded characters are infinitely more interesting than reinforcing stereotypes. Plus, the imaginative process inspires our empathy in a way that factual storytelling simply cannot. Please be aware the main criteria is ‘films that are good and happen to have women in them’. If it’s not got credentials, it’s not getting in.

Most of these I saw as a teen’ but still consider timeless for the screen.

Ridley Scott directed this early ’90s classic. Sociopolitical and visually stunning, with an ending so iconic it still gets referenced in popular culture today. Mix with ingredients like Susan Sarandon, 1/4 of the cast of Resevoir Dogs and a shirtless Brad Pitt, and you’ve got a hearty 130 mins of craft mastery in front of your peepers. Essentially a road trip gone wrong, two women grow tired of their suburban housewife roles so escape in search of freedom, only to be met with the inevitable misogyny they sought relief from. Its tone varies from light-hearted sentimentality to heavy-hitting wisdom, mostly from the wise Louise, so you learn as you laugh. 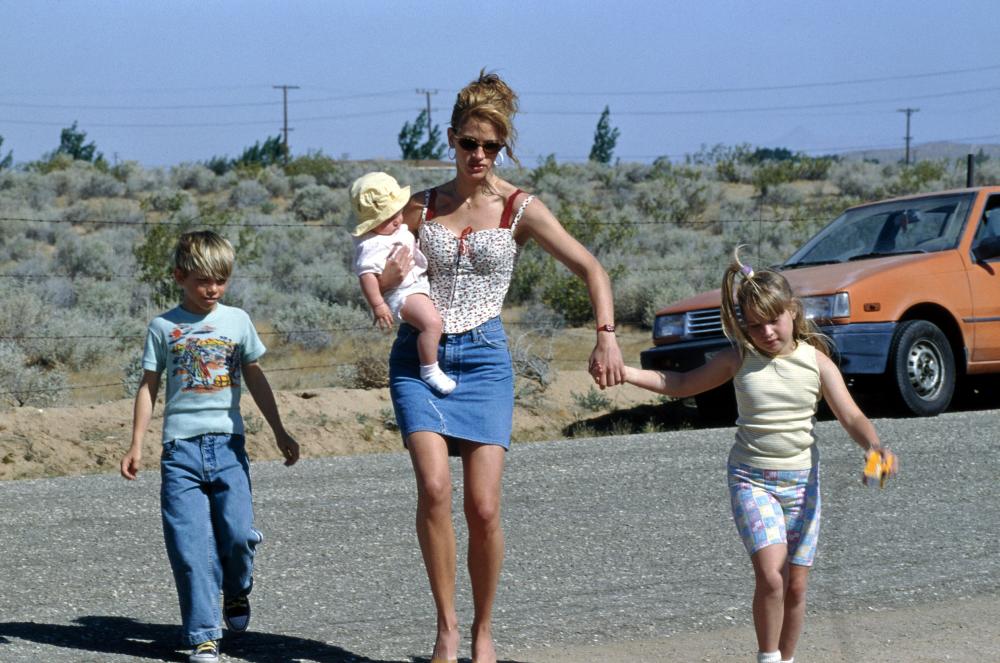 Based on the true story of an ordinary woman who managed to build a legal case in protest against contaminated Californian drinking water without any technical expertise, this is a rags to riches story where success stems from one woman’s compassion rather than self-serving greed. History was made thanks to Erin’s courage and resourcefulness. It’s inspirational to watch a person succeed despite the odds in a noble crusade because her goals are philanthropic and really, what’s more badass than defying expectation to fight for what’s right?

Fun and frollocks. That’s the perfect way to describe this flick. Superstar Cher plays the effervescent Mrs Flax, while a young Winona Ryder and Christina Ricci entertain alongside her wily ways. It’s a defiant nod in the direction of independence juxtaposed with the coming-of-age need to fit in. The dialogue and direction of this film is whimsical and yet entwined with a wholesome aura that says ‘accept yourself for who you are’.

Off the walls (but firmly on the ceiling), Romy & Michelle’s High School Reunion is the zany 90s comedy we don’t get blessed with enough nowadays. If I wrote the copy to advertise it, I’d convey the central message: it doesn’t take itself too seriously. One of my favourite elements is the use of flashbacks because character backstory gives us a chance to vicariously cringe at universal high school experiences. Afterwards we’re left with the maturity of realising our enemies are “a bad person with an ugly heart and we don’t give a flying fuck what you think.” That’s about as deep as the film gets since it’s mostly silly irreverence and flat-out fun.

The original Mean Girls but with black humour and a young Christian Slater. Veronica is the part-time badass you identify with as she navigates tricky high school dynamics and the allure of sociopathic men with dimples…we’ve all been there. Every line is memorable and you’ll be saying ‘fuck me with a chainsaw’ in the face of crisis for decades afterwards. ‘Sass’ levels are off the charts so if you want more savage insults at your disposal, Heathers has got you covered.

Hughes is a teen-flick King in the mind of many film fans, perhaps due to his sincere compassion for the alienation of adolescence. His 80s era films received cult status in the years after their release, and each one was written by a 30-something year old man.

Ferris Bueller’s Day Off is basically ‘some guys have all the luck‘ for 1 hour and 43 minutes. Released in 1986, it has most of the hallmarks of a John Hughes movie: a self-aware lead character, witty dialogue, anti-authoritarianism etc., and yet it’s more optimistic than his usual efforts. The protagonist in his golden era of film would typically be a misunderstood outcast from a lower-middle class home undergoing high school trauma but Ferris Bueller breaks this mold completely. Ferris is a rich kid loved by everybody, spanning from the police department to those he manipulates in ‘junior’ year. He is an ‘everyman’* who gets what he wants and doesn’t face the consequences -an interesting morality when you see it on the page but on the big screen you accept his antics as harmless fun.

A character more in keeping with the Hughes catalogue is the ‘always sick’ (and probably clinically depressed) Cameron Frye. The most famous theory about the film is centred around this down-trodden dude and his penchant for self-pity. It has long been said that Cameron imagines the eventful ‘day off’ from his bed and Ferris is merely a figment of his imagination; the happy-go-lucky guy he wishes he could be. Sloane is supposedly based on a girl he fancies from afar in school, so she takes her place as his alter-ego’s lover. The crux of this conspiracy can be summarised by the phrase ‘…and it was all a dream’.

I think it’s a bittersweet idea, but also totally bogus.

In her book, ‘Life Moves Pretty Fast: The lessons we learned from eighties movies (and why we don’t learn them from movies any more)’, Hadley Freeman points out that ‘only a teenager could think that Ferris is cool’ since his hedonism comes from a place of arrogance and immaturity. When you’re a teenager living out the mundanity of high school without much attention, you envy the ‘popular’ people because they get a reaction from everybody – some people look back at their school days and recall the misery of feeling invisible. John Hughes was one of these introspective types, so instead of creating a main character close to his teenage self again, he imagined what it would have been like if he experienced the notoriety other kids enjoyed. And thus, Ferris Bueller was born.

To add credence to this idea, all of Hughes’ teenage melodramas were based on his hometown of Chicago and filmed in surrounding areas to reflect the class divide he witnessed as he grew up. As a child, Hughes recalled his own solo trips to the art gallery frequented by the trio onscreen, adding The Smiths contemporary melancholy to give it the perfect soundtrack. By including such a scene Hughes was able to revisit these moments from a more carefree perspective – and in this film, perception is key. Ferris makes a speech during the parade aimed at Cameron’s self-imposed misery: “I’d like to dedicate it to a young man who doesn’t think he’s seen anything good today”.

It hardly stretches the imagination to say that writing allows you to live vicariously through an imaginary realm, and with Ferris, he visualised an adolescence he wished was his own, if only he wasn’t trapped in the self-hatred typified in the familiar angst of Cameron.

Maybe Ferris Bueller wrapped up his inner work in solving the injustices he experienced as a young’un in America, and he felt like the tone change was an appropriate place to say ‘Danke Schoen’ to all the audience members allowing him to grow up again.

Hearkening back to days of yore may be a foolish past-time in your personal life but it’s a worthy endeavor in the realm of cult films and classics. Time is kind to pop culture when its creator cared to preserve its appeal; idiosyncratic characters, universal stories and well-written comedy are the ideal mix for nostalgic indulgence. Be wise, choose something your conscious mind hasn’t registered in recent years in order to experience key moments as if they’re completely new to you. They won’t be but contentment comes from familiarity and we live in the Matrix anyway. (That one isn’t on this list).

My big brother and I adored this in our youth so I was praying for good things. Thankfully, the dumbass duo trope still amuses my adult brain: Garth’s ‘Foxy’ dancing and the Bohemian Rhapsody headbanging scene are still precious. All of the meta jokes in this self-referential comedy will make you chuckle knowingly as you yearn for Mike Myers to break down the fourth wall just one more time. It’s typically clever in having the social commentary exist in undertones that you can feasibly ignore if you’d rather just soak up the obvious stuff, yet we view our two protagonists as anti-heroes for revering self-expression. As such, I newly appreciate Rob Lowe’s nuanced portrayal of the textbook selfish yuppie who tries to capitalise on our protagonists’ romantic dreams. Less exciting is Meatloaf’s brief bouncer cameo as he’s inevitably overshadowed by Alice Cooper rocking up to perform another lyrical shit-show: Feed My Frankenstein to the infamous reception of ‘We are not worthy!’ Humorous ridiculousness.

I recently made a most excellent life choice to devour this alongside a beastly curry (chicken Jalfrezi). Whimsical japes include masquerading as medieval knights to re-enact the Luke vs. Darth Vader lightsaber duel. Nearly every adventure they have is typically tame 80s high school hedonism and yet you long to escape your mundane reality in favour of their random expedition. When you realise the similarity between a time-travelling phonebox and the Doctor’s Tardis a smirk will appear on your big, nerdy face. Silly and escapist, their characteristic goofiness is still most quotable. Examples include calling Socrates ‘So-cratz’ and miming air guitar to news of the ‘Iron Maiden’ like it’s a stage invite from Bruce Dickinson. It’s also notably unique in portraying metalheads as cool, laid back people who sometimes look like Keanu Reeves. To my surprise, Rufus was played by satirist George Carlin – a fact my child self didn’t know. Alas, I can now congratulate myself on my reformed historical knowledge like my heroes Bill and Ted.

It’s a rite of passage for every pretentious teen to watch Trainspotting in awe of the brilliant cast, innovative directing and stellar 90s soundtrack. Now you’re older, you may feel like you’ve recovered from your wide-eyed fascination with drug-fueled debauchery and wish not to return to such territory but have faith in its iconic reputation. You will still impulsively rave along with Born Slippy and recoil at the baby scenes in terrible enthusiasm before making a mental note that injecting heroin is clearly just not cricket. Inspiration is a lusted-after feeling and the brazen swagger of Diane is undeniably enviable. Danny Boyle’s low-budget triumph invokes the idea that you could go rogue and successfully film an indie adaptation of a new novel. It just seems likely for you. Besides the sequel, Porno, has a 2016 release date now so if you relive this arguable PSA against compulsively chasing the dragon, you can hype yourself up way ahead of time.